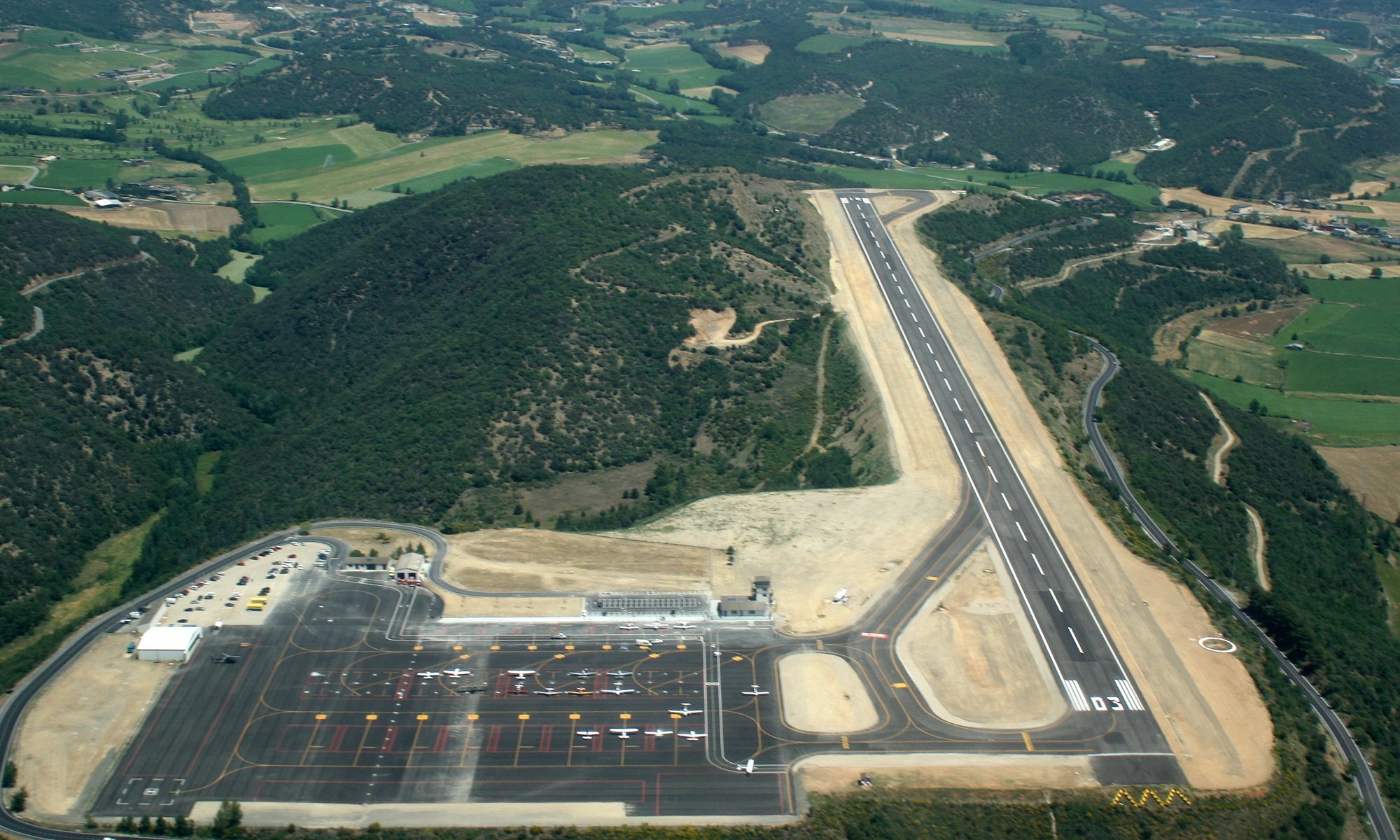 The principality of Andorra shares two similar items with San Marino. Both have two active heads of state and both are reliant on airports outside their borders.

Andorra’s location in the middle of the Pyrenees mountain range, is a magnet for skiers and mountain lovers alike. The key is to bring in those visitors.

When the idea of building an altiport – an aerodrome in mountainous terrain was discarded due to its difficulty, the alternative that was obvious for all was to turn to La Seu d’Urgell Airport, just across the border in Spain, into Andorra’s air gateway.

The airport is on a flat-top hill and has seen little action since regular flights to Barcelona were abandoned in the early 1980s. But this can change soon with a renovation program.

Local topography and runway length do not allow aircrafts bigger than the 27-meter ATR turboprop. Still this could be a good start for people busing into the resort.

Two separate airline start-ups – Andorra Airlines and Air Andorra have interest in this airport, but have not started to operate yet.

The most famous person to have landed in Andorra-La Seu d’Urgell Airport is Elton John, who landed here in 2015 on a way to a concert in Andorra.

The Andorran Family Business (EFA) demands that the new Government mark as a priority the construction of an airport in national territory. The request was made by the president of the entity, Francesc Mora, with reference to the latest announcement by Spanish Minister of Development, José Luis Ábalos, who has set at least for April 2020 umpteenth date for the possible implementation of the GPS system at the Andorra-La Seu airport. «In November, they told us that we would have GPS in May. Then he was postponed for the fall and now we have already spent the next year, “Mora recalled, then said that” Andorra as a country cannot be waiting for an agenda that does not control “but has to take “a sovereign decision”.

In this way, the EFA reiterated its support for the Chamber of Commerce and its president, Miquel Armengol, a defender of the need for an Andorran airport, who announced that, unlike of the urgency airport, the GPS navigation system would not present so many complications in Andorra, since “the approach system is not homologable in the Headquarters has nothing to do with what it is not possible to implement here.”

As it is planned for months, the Chamber of Commerce is to publish the first phase of a study conducted by French experts to determine the real and economic viability of an air infrastructure in the Principality and that Armengol has already pointed out that it will be «Very positive».

To reaffirm its position and that “the country’s economy needs an opening of communications”, Mora put as an example the cut to the RN22 that the past month of April left incommunicado the Passage of the House in his access with France “This is a further demonstration that Andorra cannot continue in this situation or pretend to be open and attractive for foreign investment if it maintains the same infrastructures as always”, the president of the EFA established. However, in his opinion with the construction of an airport in the national territory it would not be enough, and it would also be necessary to improve the existing roads and to make new ones, as well as to have a railway connection and a heliport. Based on this basis, Mora said, “Andorra will only be able to advance” if the Government places on the European table the infrastructures and a change in the economic model and the internal market.

Thus, Mora called “historical” the moment that the country is currently undergoing in its negotiations with the European Union (EU) and requested that communication with abroad also be paramount both in the association agreement with Brussels as in other agreements and bilateral relations with France and Spain, since this “enclave is and will be in the future the main problem of the Andorran economy».

On the other hand, the EFA also presented the XXIè cycle of Family and Quality Company that was going to be held a couple Fridays ago in La Massana under the title Trade in Andorra: a sector that must be revitalized. In fact, one of the papers will discuss how the association agreement will affect the customs and its possible abolition. «This is a deep theoretical reflection. We are accustomed to a franchise trade that has worked very well for years, but we believe that there are others that can also work and that is what we want to consider again “, explained Mora.

The business network asks to participate personally in the association agreement

Finally, Mora explained that during the last election campaign, the EFA asked all political parties that Andorran businessmen are present in the negotiations with the EU. The president of the association said that it is “unthinkable” that a country “move forward” in a process of these characteristics “excluding” the national business fabric, since “what is being negotiated has a great impact” for the economy in general and for all of them in particular. Thus, Mora stated that “we do not want to be informed, but want to be in the negotiation tables,” and added that they would not accept that only “from time to time we are told something” about it. As a result, the EFA has already requested a meeting with the new head of government, Xavier Espot.

We’ve written already about a revamp to the Engadin Airport serving St Moritz and new flights of Taos Air for Taos Regional Airport.

Featured Image: La Seu d’Urgell Airport in Catalunya, outside Andorra serves the Andorran airspace. The EFA claims that the failure of the GPS makes an airport essential in the country