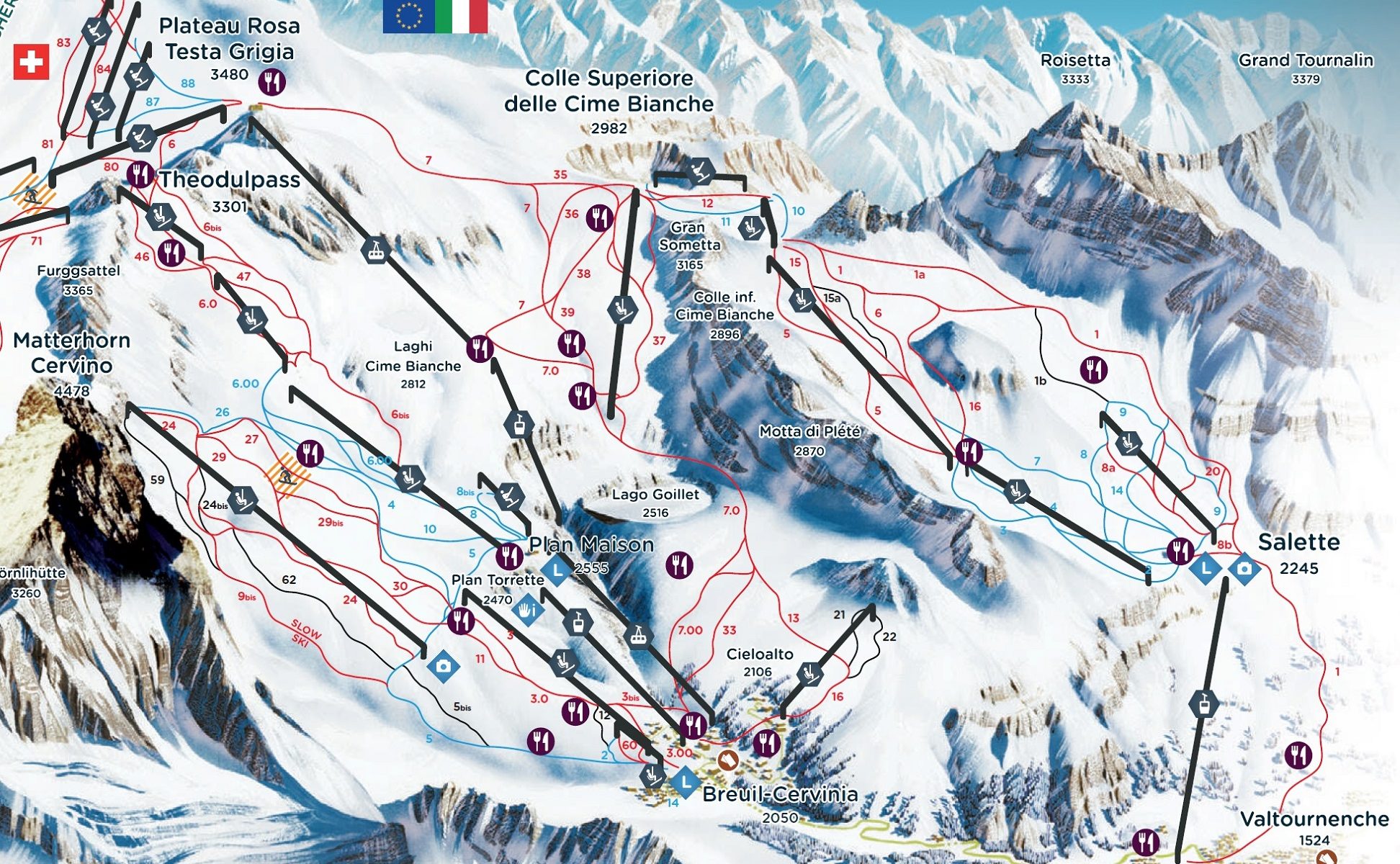 VALTOURNENCHE – Due to a strong and sudden gust of wind the ski lift stopped and it was necessary the intervention of the Valle d’Aosta mountain rescue for the evacuation of skiers.

It took about fifty minutes for the recovery of 27 skiers stuck yesterdat morning on the Cretaz chairlift in Breuil-Cervinia. As explained by the President of Cervino Spa, Federico Maquignaz, a strong and sudden gust of wind blocked the ski lift, in the valley station, and it was necessary the intervention of the Aosta Valley Alpine rescue for the evacuation of skiers, all in good condition.

On the spot, with the help of the helicopter, technical guides of the Valdostano Alpine Rescue and of the Guardia di Finanza and, on the ground, operated by cableway operators have worked.

The-Ski-Guru TRAVEL can organise your bespoke ski trip to the Americas, Alps or Japan, including for those going from Britain to Europe, booking your Eurotunnel trip, and for all trips: lodging, lift tickets, rentals, ski school, and all you need for an excellent vacation. Go to https://www.the-ski-guru.com/travel and upload your information – this page will be updated soon with more travel ideas. Check our February offer for Zermatt staying at the Chalet Zen or Penthouse Zen, our amazing Ski Safari in the Dolomites , stay at the San Lorenzo Lodge White Deer in the Val Pusteria of Sudtirol, in the Hotel Petrus in Riscone, for skiing Kronplatz, or check our Easter offer to Obergurgl-Hochgurgl and Sölden to ski with your family. You can ski to have lunch in the Rifugio Sofie in Seceda, Val Gardena, in the Dolomites.

Or you can read our last news on equipment as seen at the London Ski Show. Also, the new range of skis of Black Crows, one of our favourite brands. Shred-Dog is a definitely favourite brand for parents of growing kids. And check the new Mohawk helmet with augmented reality. You can see my review of the Head Nexo Lyt 100 boots for women.  A new app, Ski Tracker Pro offers you a one month free download if using a promo code.

Crested Butte will have a new chairlift to replace Teocalli lift for the 2019/20 ski season. Jay Peak is officially for sale. Another North American resort, Fortress Mountain Ski Resort, is eyeing in opening by 2020.

Also, you can read how Grandvalira will be staying together as one lift ticket company and how they are adding Ordino Arcalis to  this offer. Grandvalira is opening now all of its six sectors.  And also read how someone tried to sabotage some lifts in Vallnord’s Pal Arinsal. And as if it is starting to be a trend, there were two lifts sabotaged in Passo Rolle, in Val di Fiemme, Trentino. Fortunately they were repaired in record time to open to the public. It seems also that the deadly fire in a Courchevel employee housing building was arson. Uber has launched its service UberSki in some resorts in France, after having done so in the United States.

Also, Mt Hood Meadows was forced to evacuate one lift with 150 skiers and boarders due to a power failure. And the same was the case in a lift with 140 skiers/boarders in Whitefish, Montana. A last one to report was now in Stowe, VT, with more than 150 stuck skiers and boarders that have to wait up to two and a half hours to offload. Recently a British skier was killed after suffering a cardiac arrest on a chairlift falling 32 feet to the ground in Méribel resort in Les Trois Vallées. You can see our recent article on how avalanches claimed two lives in Switzerland the past week. And read more what is the real risk of avalanches. Three Germans have been killed by an avalanche near Lech and a fourth is missing. Two were caught in an inbounds avalanche near Kachina Peak in Taos and taken to hospital. 7 were killed as a helicopter and a light aircraft crashed over the Ruitor Glacier near la Thuile in the Italian Alps. Two were killed by an avalanche in St Christoph-en-Oisans in the French Alps.